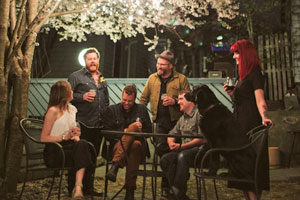 Spencer Albee is a Portland based and nationally acclaimed singer, songwriter and producer. Since 1995, he has toured internationally, signed multiple record and publishing deals and worked with artists ranging from David Bowie to De La Soul.

Rolling Stone Magazine recently called Spencer a “21st Century master in the lost art of Beatlesque hooks.” Today he can be found touring in support of his 20th studio album “Relentlessly yours,”.