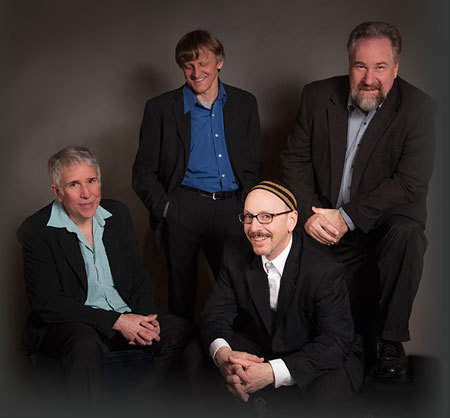 The Evenfall Quartet hail from Boston, Mass. The Quartet came together through the jazz tradition of playing sessions and doing Tour Dates.

Mark Earley picked up the saxophone in 4th grade and by the age of 19 was touring with The Guy Lombardo Orchestra. In 2001 Mark joined up with five time Grammy nominated Roomful of Blues. He has earned 6 WC Handy awards for best horn section in Blues and a Grammy nomination for the album That’s Right!

Joe “Sonny” Barbato comes from a family with a long history of excellent musicians. Equally adept at piano, organ, and accordion Joe has toured and recorded with Stanley Turrentine, Ravi Coltrane, Roger Humphries, Larry Coryell, and Jeff “Tain” Watts. Joe also plays with singer-songwriters and instrumental tunesmiths such as Duke Levine and Will Daley.

Brad Hallen has been playing professionally since 1975. Starting out after high school in Top Forty bands, Brad moved to Boston in 1978 and quickly became part of the musical fabric in the city. Since 2008 Brad has been a member of Duke Robillard’s band and has been touring the world and recording most of his projects.

Jerzy “Jurek” Glod was born in Poland and started playing drums at the age of fifteen. In the next few years he formed a jazz trio with Jacek and Wojtek Niedziela. They toured Europe and won numerous awards including 1st prize at the prestigious European Jazz Competition in Leverkusen, Germany. After getting his Masters degree in Poland, Jerzy received a scholarship to Berklee College of Music in Boston, Mass.