The Garden Stage Dinner Concert Series – Once an Outlaw 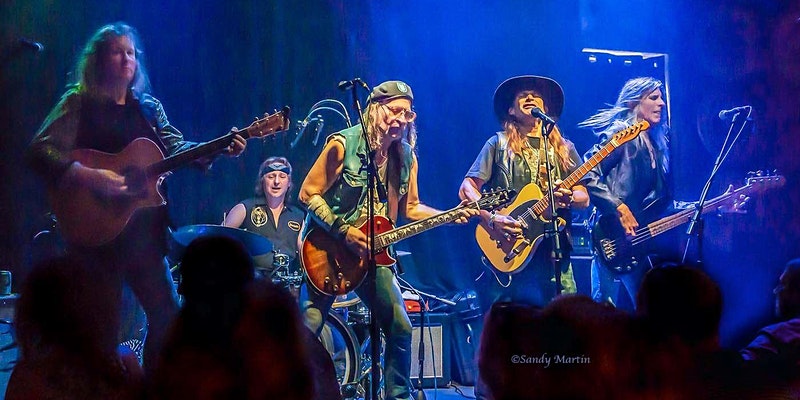 Once an Outlaw is the Southern Rock Supergroup featuring Chris Hicks (Marshall Tucker Band), Chris Anderson (formerly The Outlaws), Jeff Howell (formerly of Foghat), A.J. Vallee (The Southern Rock All-Stars), and Chuck Farrell (James Montgomery). These southern rock legends may be “standing on the shoulders of giants”, as Jeff Howell often says, but they are all also giants in their own right.

Chris Anderson, an Outlaw member from 1986-1989 and 2005-2018, has had many successes with bands such as Blackhawk, Grinderswitch, and his own band Rattlebone. Other accolades include writing songs, touring, or playing with The Allman Brothers, Lucinda Williams, Bad Company, Hank Williams Jr, and many more.

Jeff Howell, bassist extraordinaire, and former member of the bands Foghat and Savoy Brown was also an Outlaw from 1993-1996. They recorded three cd’s during that time together, including So Low, Hittin The Road Live, and Diablo Canyon.

Hailing from Boston, drummer A.J. Vallee is the go-to drummer and percussionist on many platforms. To date, he has toured regionally and nationally with James Montgomery, The Southern Rock All-Stars (feat members of Molly Hatchet, Blackfoot) Jon Butcher, Carmen and Camille (Billboard, MTV’s The Hills) and boasts song placements on NBC and ABC T.V. with Boston’s own Starr Faithfull.

Once an Outlaw is pleased to announce the addition of keyboardist/vocal extraordinaire Mike Kach to the lineup. Southern rock fans might recognize Mike from The Dickie Betts Band, Great Southern, and Molly Hatchet. You can also catch Mike with an Allman Revival.