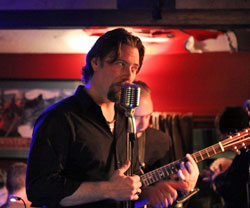 Hoot Night is Back! In The Garden – Tuesday’s 5:30p-8p, Acoustic Open Mic with Host Jonathan Sarty. BYOM-Bring Your Own Mic!

Following in the colorful tradition of some of the Valley’s most beloved musicians, Hoot Night Host Jonathan Sarty takes the stage every Tuesday Night at the Wildcat Tavern from 5:30 – 8pm to create an incredible blend of music as local performers arrive with guitars in hand and visitors to the Valley make their first appearance at the legendary Hoot Night.

One of the region’s most accomplished performers, New England singer/songwriter Jonathan Sarty has performed throughout New England with his White Mountain Boys and most recently with his Jonathan Sarty Band. Jonathan’s steady upward trajectory over the years has seen him working and performing with some of the most accomplished musicians in the northeast. Sarty is perhaps best known as host of the popular New England based Cold River Radio Show. 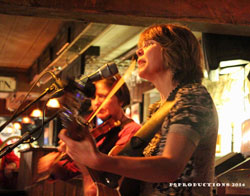 Originally from Maine, but having traveled and performed extensively throughout the U.S., Sarty is a mainstay in the vibrant Valley entertainment scene where he remains busily working with the variety of music venues the region has to offer. A diverse performer with an extensive repertoire of classic American roots, rock, country, folk, and love songs, as well as a formidable catalog of original music, Jonathan is known by many of his most beloved fans as a smooth voiced crooner. When he is not rocking with his rock band on a Saturday night somewhere, he can be found performing intimate dinner performances like the Wildcat Sunday Dinner “Croon to the Moon” show, every Sunday Evening from 7-9pm, or Crooning with his fabulous Cold River Radio Band on the bi-monthly Cold River Radio Show. This side of Sarty’s stage persona with his velvet voice has a classic charm and appeal that has garnered a strong and eclectic fan base. 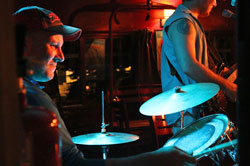 Sarty is one of New England’s hardest working musicians. Director, editor, producer and host of the Cold River Radio Show, founder of record label, booking agency, and event production company the White Mountain Music Group, and keeping up with a 5 to 6 gig per week schedule, Jonathan is one of the Wildcat Taverns favorite guys. We love having him on board!

For more information about the Cold River Radio Show visit coldriverradio.com. or for information on the WMMG and/or more about Jonathan Sarty visit www. jonathansarty.com. To contact Jonathan directly email whitemtmusic@yahoo.com